To our great pleasure the wagtails are back at Bron-y-Graig.  None of us can work out if they are yellow wagtails or the slightly more common grey wagtail - which has a confusing amount of yellow on it - but we are thrilled to see them again.

Last year they didn't manage to raise any chicks but this year they are on their second brood.  They nest in the Dublin Bay climbing rose beside the Stables so we ask our guests not to disturb them if they can help it. The birds are very cunning - you never see them fly direct to their nest - as soon as they spot you they won't go near it.  I have only once seen the parents feed the first brood, and that was after spending half an hour crouching behind the quarry wall so they forgot about me. 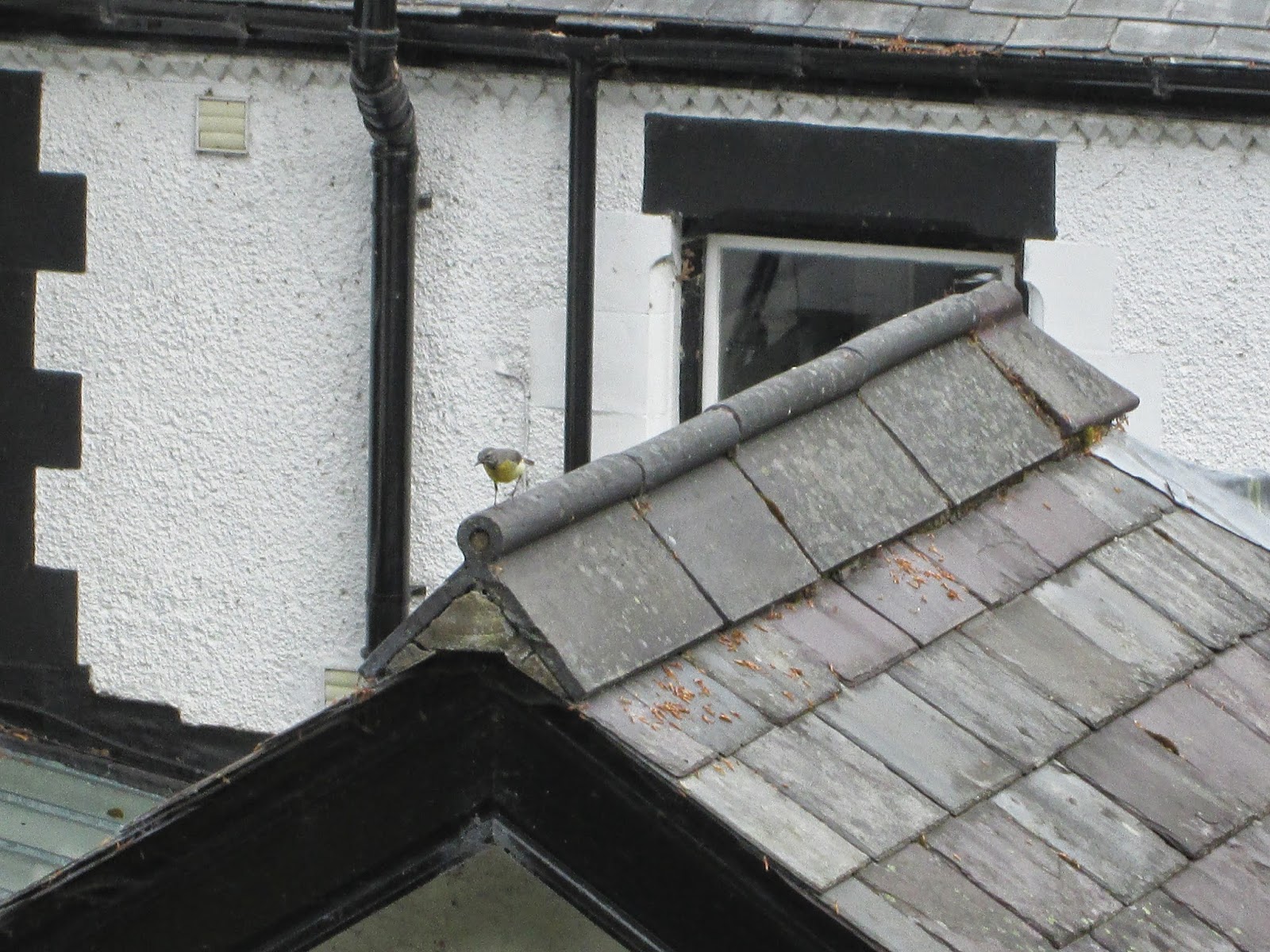 Here's the only photo I managed to get 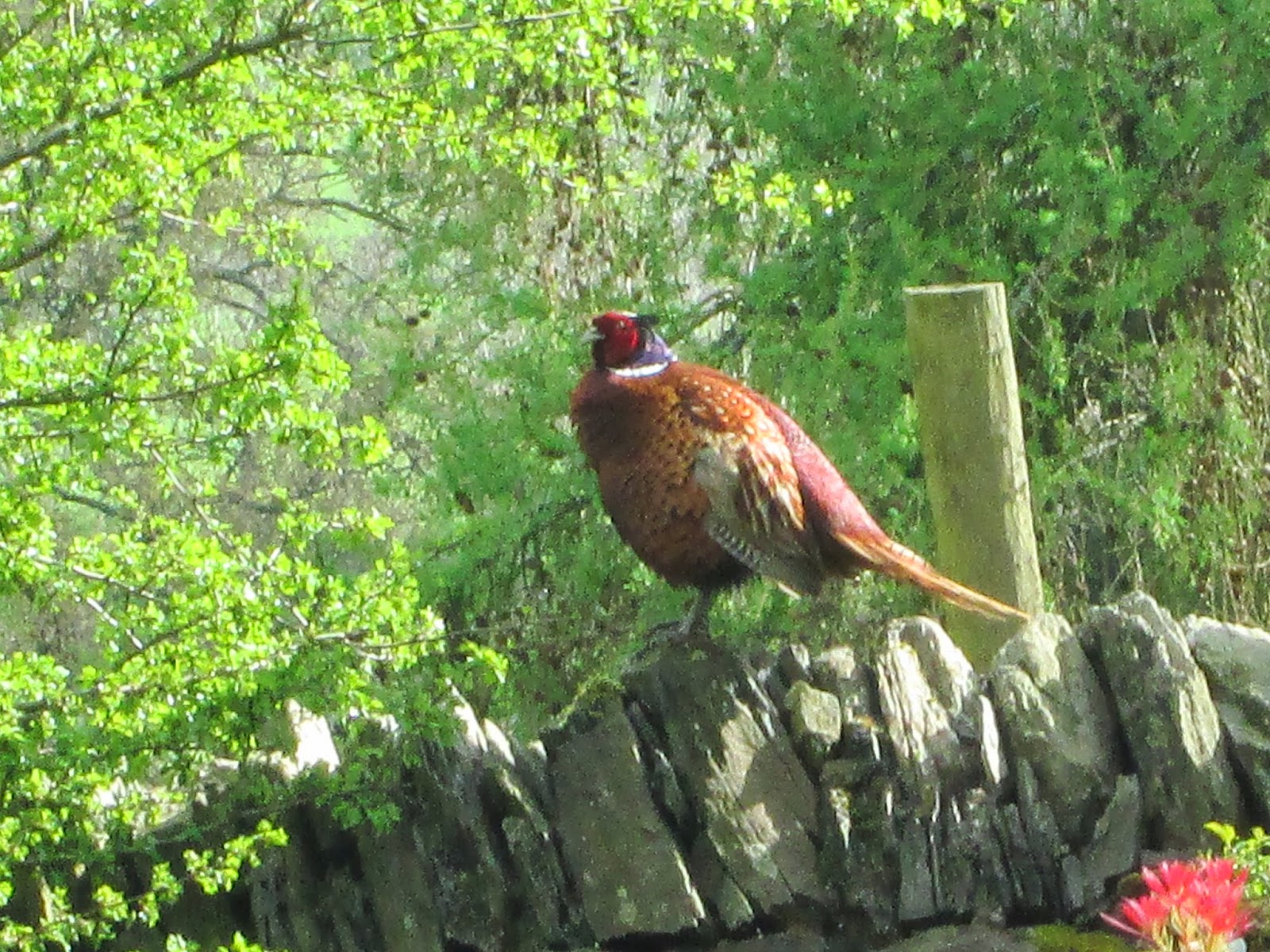 We always have the odd - and I mean odd - pheasant poking about.

As I write this I can hear small birds cheeping somewhere which probably means there are bluetits in Room 5's gables again.  And there is a big swallow?housemartin? nest in the highest gable beside Room 6. 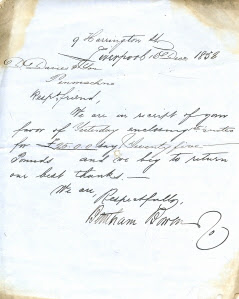 We are in receipt of your favor of yesterday enclosing 2 ½  notes for £25.00 say Twentyfive Pounds and we beg to return our best thanks.

Bentham Bowen & Co
Posted by Unknown at 11:39 No comments: 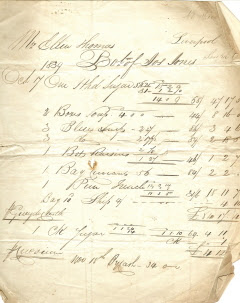 I think the underlined writing at the bottom says by Gwydir Castle  which could be the name of a ship, indicating that the goods were brought into Wales from Liverpool by sea. I cannot read the second underlined word although it may be a signature as it is followed by the payment due date Nov 18th – by cash £34.0.0.

There were no envelopes in those days so the invoice was folded for posting and addressed on the other side to Mr Ellis Thomas, Grocer,  Penmachno, Nr Llanrwst
Posted by Unknown at 11:50 No comments: 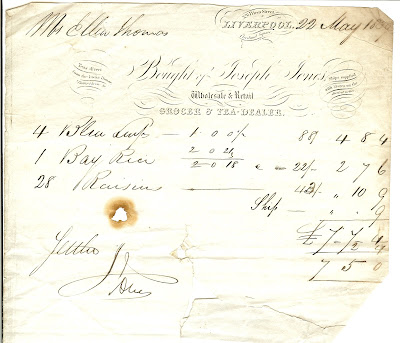 This invoice is dated 22 May 1839 and records a sale to Ellis Thomas from Joseph Jones who describes himself as a Wholesale and Retail Grocer and Tea-Dealer.  In swirly decorations round the firm name he advertises:

Ships supplied with Stores on the shortest notice

If I am reading the list of goods correctly, the invoice is for

You can see a hole with a brown stain round it where the bill has been stuck on to a somewhat rusty spike for storage.
Posted by Unknown at 10:38 1 comment:

Today we got round to a project we'd been thinking about for ages - removing the box hedge from the front garden.  It's probably about 100 years old and when first planted must have been small and smart.  In the 20-odd years since we've been here it's become a monster, looming over the flowerbed, sucking out all the nutrients and bulging so fatly you can't get on to the lawn. Last month's freak snow was the final straw - the hedge was leaning drunkenly forwards.  It had to go.  The first picture is taken from Room 1 looking down on the huge hedge.

Taking off the outer greenery revealed a horrid tangle of naked branches.  At this point the gardeners among you are probably reeling with horror at this arboreal vandalism.

To be honest we have no idea whether the box hedge will survive.  It may - we had to cut back the box hedge on the upper terrace a couple of years ago after a hard winter, and it put out green shoots after a year.  So this is a "wait and see" job.  I now have a flower bed which has doubled in size! 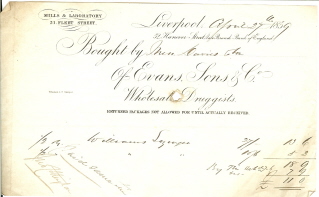 This invoice, dated 27th April 1859, is from Evans, Sons & Co, Wholesale Druggists, and gives their address as 31 Fleet Street in Liverpool, where they had a Mills and Laboratory.

It simply lists the purchase of two sorts of Williams Lozenges at a total cost of £11.00.

Evans continued as a firm into the 20th century and this advertisement for smoker’s pastilles is from July 1917.  The company was eventually subsumed into Glaxo in 1961.

The big hole in the middle is where the document has been put it on a spike after processing.
Posted by Unknown at 10:27 No comments: 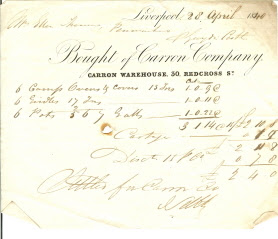 This invoice, dated 28 April 1840, lists a sale of “camp ovens and covers”.  The name of the company selling the goods is Carron, which I remember as a maker of stoves, and which survives today as part of Carron Phoenix.

Carron was one of the largest suppliers of ironmongery in Britain in the 19th Century.  It was set up in 1759 beside the river Carron in Falkirk, Scotland.

A camp oven was a cast iron pot with short legs to enable it to stand in the coals and have air circulating below; a tight fitting lid to prevent ash entering and a handle for allowing you to hang it above the fire.  Carron exported these pots across the British Empire and such pots, called Falkirk Pots, are still in use in Africa.